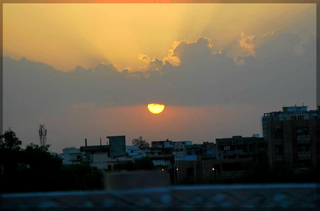 It is illegal to take Indian currency (rupees) out of India.

More than a million Indians are millionaires, yet most Indians live on less than two dollars a day. An estimated 35% of India’s population lives below the poverty line.

To avoid polluting the elements (fire, earth, water, air), followers of Zoroastrianism in India don’t bury their dead, but instead leave bodies in buildings called “Towers of Silence” for the vultures to pick clean. After the bones dry, they are swept into a central well.

Cows can be found freely wandering the streets of India’s cities. They are considered sacred and will often wear a tilak, a Hindu symbol of good fortune. Cows are considered one of humankind’s seven mothers because they offer milk as does one’s natural mother.

Dancing is one of India’s most highly developed arts and was an integral part of worship in the inner shrines of every temple. It is notable for its expressive hand movements.

Many Indian wives will never say their husband’s name aloud, as it is a sign of disrespect. When addressing him, the wife will use several indirect references, such as “ji” or “look here” or “hello,” or even refer to him as the father of her child.

A widow is considered bad luck—otherwise, her husband wouldn’t have died. Elderly women in the village might call a widow “the one who ate her husband.” In some orthodox families, widows are not allowed near newlyweds or welcomed at social gatherings.

The Indian flag has three horizontal bands of color: saffron for courage and sacrifice, white for truth and peace, and green for faith, fertility, and chivalry. An emblem of a wheel spinning used to be in the center of the white band, but when India gained independence, a Buddhist dharma chakra, or wheel of life, replaced the spinning wheel.

Every major world religion is represented in India. Additionally, Hinduism, Buddhism, Jainism, and Sikhism all originated in India.

About 80% of Indians are Hindu. Muslims are the largest minority in India and form approximately 13% of the country’s population. In fact, India has the third largest population of Muslims in the world, after Indonesia and Pakistan.

Marigold flowers are used as decoration for Hindu marriages and are a symbol of good fortune and happiness.